On Mission to South Korea

Skyscrapers, the tops hidden by smog, surrounded us.  Not too many miles away, millions traveled by subway, cars and bus.  In this small space, it was almost completely silent.  We found ourselves in the Seoul Missionary Graveyard.  Beneath the earth, lay men and women who had come before us. We were aware of their sacrifice and that their past efforts laid the groundwork for us to be there as well.  Through their work, South Korea is now home to nearly 14 million Christians.

Flying in to Seoul, it is evident how beautiful the country is.  The sprawling city is surrounded by lush mountains and sparkling ocean.  Our Cornerstone team (Walt Alexander, Julie Beaton, Weston Epley and my wife Natalie) would be joining a team from Grace Church in Maryland to help with a parenting and children’s camp that Lord’s Grace Church, a partner Sovereign Grace Church in Seoul, would be hosting.

Seoul is home to nearly 10 million people.  The city is endless.  High rise after high rise gives evidence to its bustling economy.  Seoul is a modern city comparable in some ways to New York City or Los Angeles.  The Gangnam area, where we stayed, is lined with coffee shops, fashion boutiques, and restaurants.  It was clear that this city suffers from much of what our large cities suffer from – a worldliness that takes its eyes off God and places them on the many vanities of a fallen world. 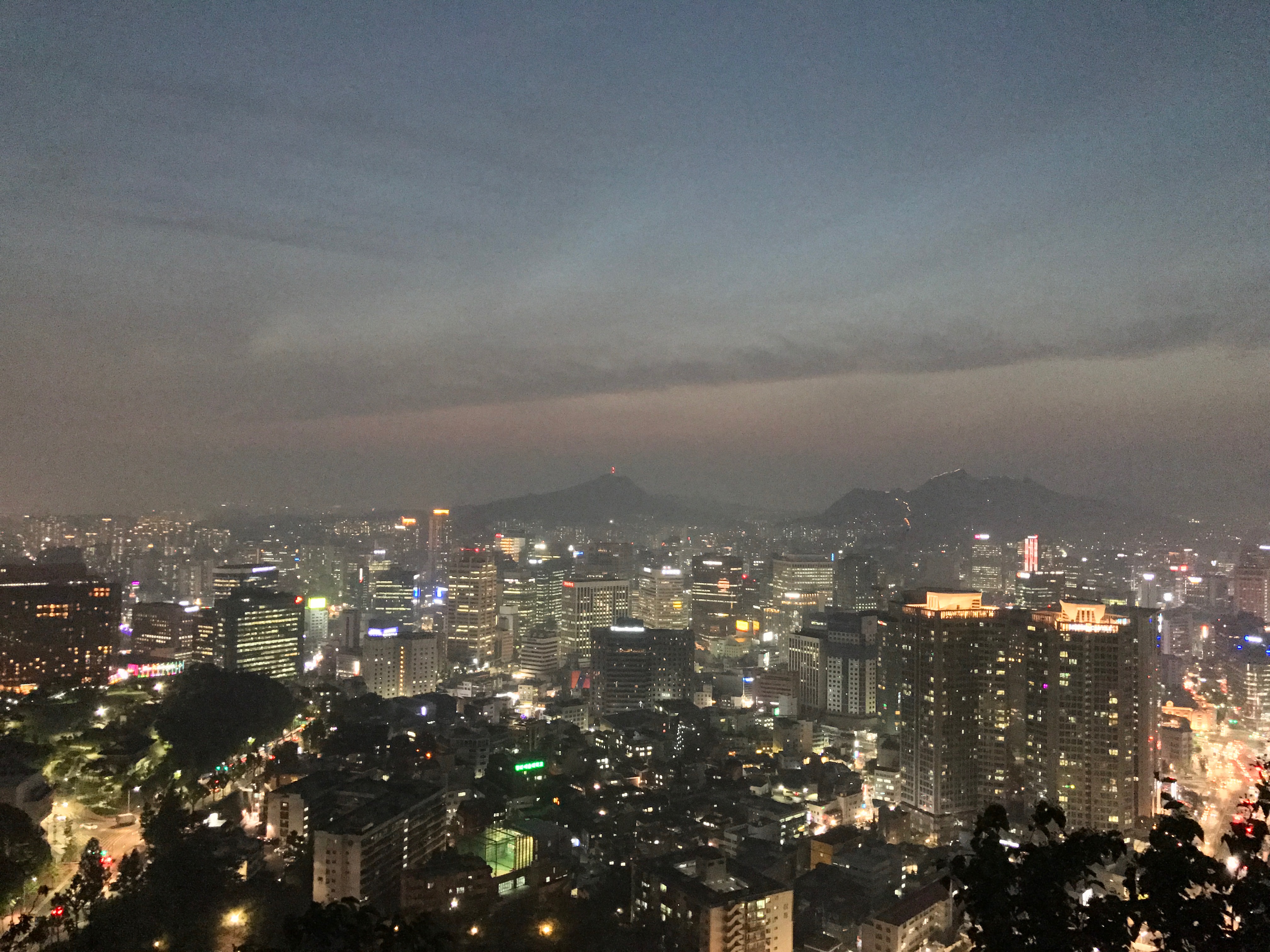 The vast Seoul skyline lights up at night.

After settling in Saturday night, we headed to Lord’s Grace Church on Sunday morning to worship and listen to Larry preach from Grace Church in Maryland.  Immediately, we were struck with the specialness of worshipping with people speaking an entirely different language.  Many that have gone before us have called it a glimpse of Heaven and I agree.  After the service, the whole church had lunch together in the building. Natalie and I spoke with a couple of boys from the church as we ate.  As would become the standard for our interactions with the children there, we were blown away by their knowledge and maturity.

The rest of the day we were shown around Seoul by a family from the church.  Their American names were Josh and Kate.  They were a lovely family with two daughters.  They generously took us around Seoul, showing us markets and historical sites.  We talked about the gospel with them and how the work of the Holy Spirit changed all of our lives. 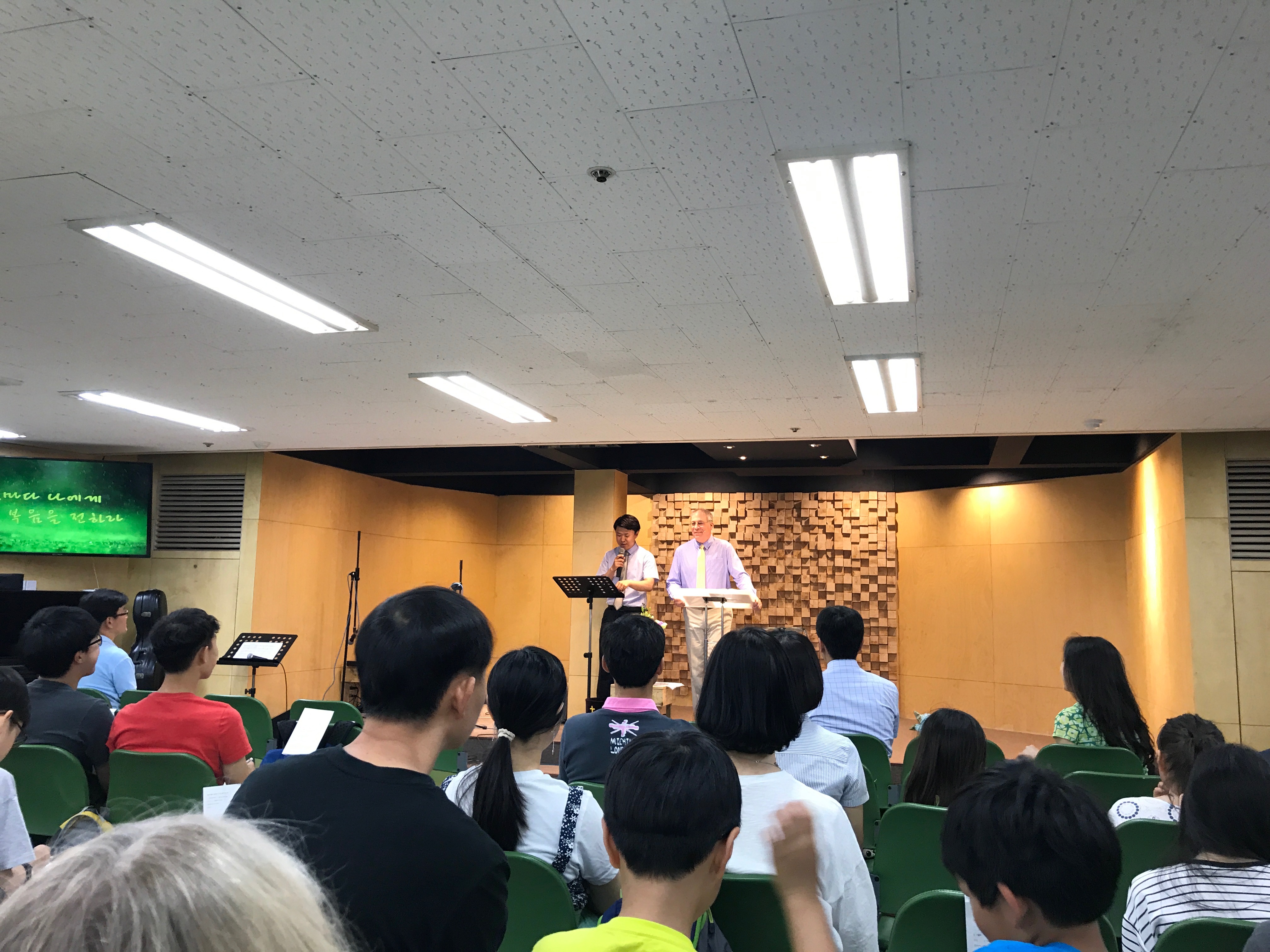 Sunday morning was spent at Lord's Grace Church in Seoul.

On Monday morning we headed outside of Seoul to the Christian Retreat Center to host a children’s camp.  While Walt would be speaking with parents on “grace-centered parenting”, the rest of us would be wrangling 60 or so kids from ages 5-16.

The camp was filled with arts and crafts, games and an overwhelming dose of pandemonium.  Yet the kids were respectful, well-behaved and intelligent.  Their ability to problem solve and communicate was beyond our expectation.  The main focus of the camp - among the glow sticks, soccer games and the bruised knees - was to present the gospel.  We spoke to them about why we can have real, true joy.  We presented the gospel to them, and it seemed like a few of them got it.  They memorized Nehemiah 8:10 and even learned the song “This is the day (that the Lord has made).” 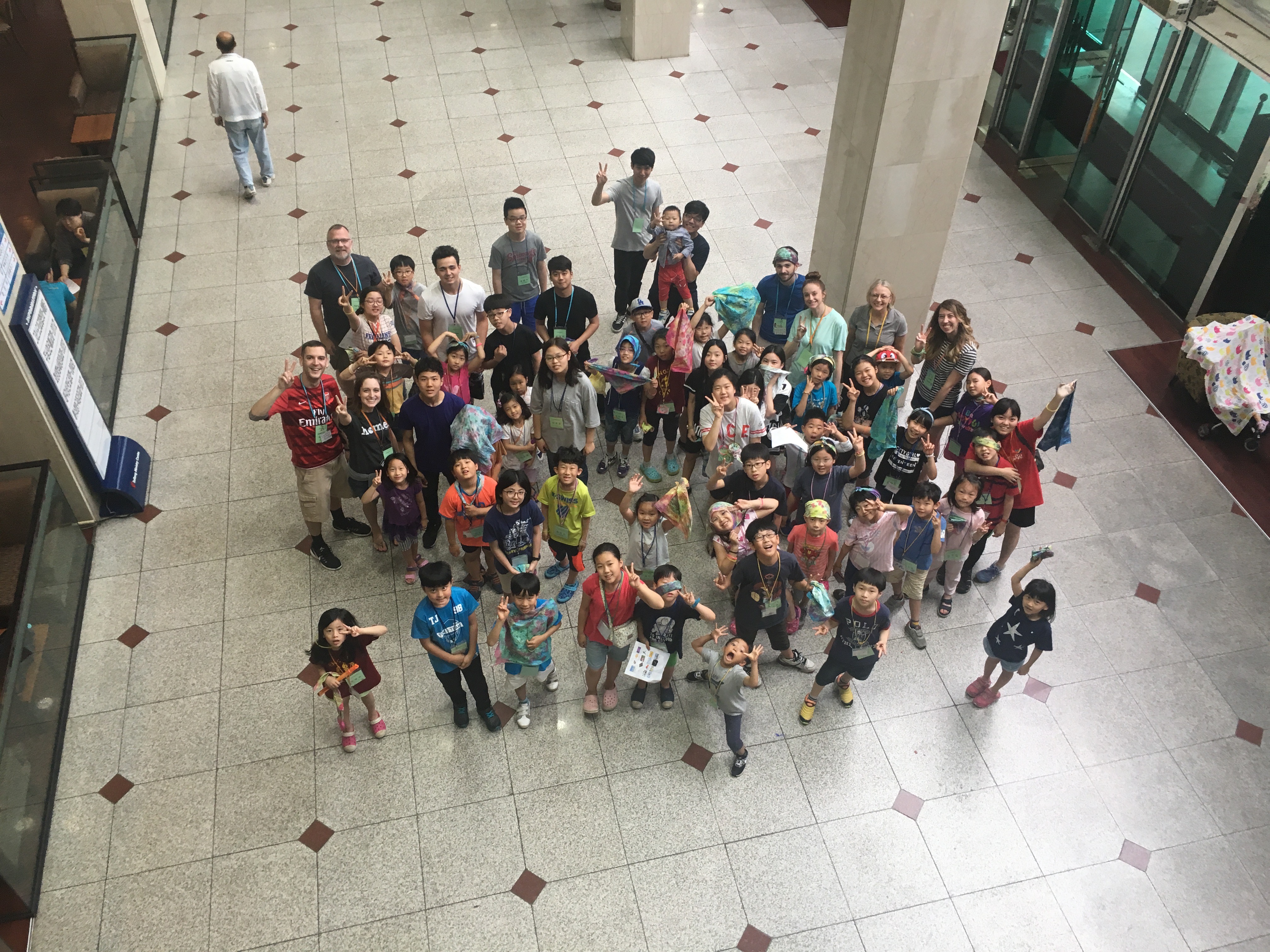 A group photo after camp with the children and teachers. About 50 kids were in attendance.

There are many stories to tell from the camp, but I love this one.  It show how much these kids appreciated us being there and their amazing attitude.  As we were playing baseball, a young boy around the age of four approached me.  He asked, “How are you?”  I responded, “I’m great, you?” to which he replied, “I am happy.”  I’ve never heard that answer before — and this kid was genuine.  This was a commonality amongst the children there: they truly were happy.  I think they were blown away that people from America would come all the way to have fun and teach them.

The impact of this camp is evident.  Year after year the camp has return children.  We at CCK have a front-row seat to watch these kids grow and mature.  In some small way, we play a part in that, even if it is just for a few days.  I hope that they learned something they hadn’t and have a better understanding of true joy.  So, when I see that child I mentioned before again, and I ask him how he’s doing — happy will have a whole different meaning to him.

And as much as they learned, perhaps we learned even more.

The rest of the week, Songwahn (pastor of Lord’s Grace Church in Seoul) and his wife Miran, were intent on showing us around Seoul.  In their words, they wanted us to understand and appreciate Korea, so that we can come back and better pray for them.  With America’s incredible news cycle in full force in the months prior to us arriving, I thought this was the perfect time to know the “real” Korea.  What we found is that there really are two unique Koreas that are still at war with one another.  We found that in spite of that, there is hope, and that the resolve of the people there is strong.

Our first major stop would take us about 90 minutes outside of Seoul to the DMZ (the Korean Demilitarized Zone).  It’s a strip of land about 1.5 miles wide that separates the north and south.  As we traveled to the border, the buildings faded into the distance, replaced by rice paddies, small towns and shanties scattered about.  Soon after those, fences and barbed wire lined the roads.  Warning signs of land mines were not uncommon.  We found ourselves face to face with conflict. 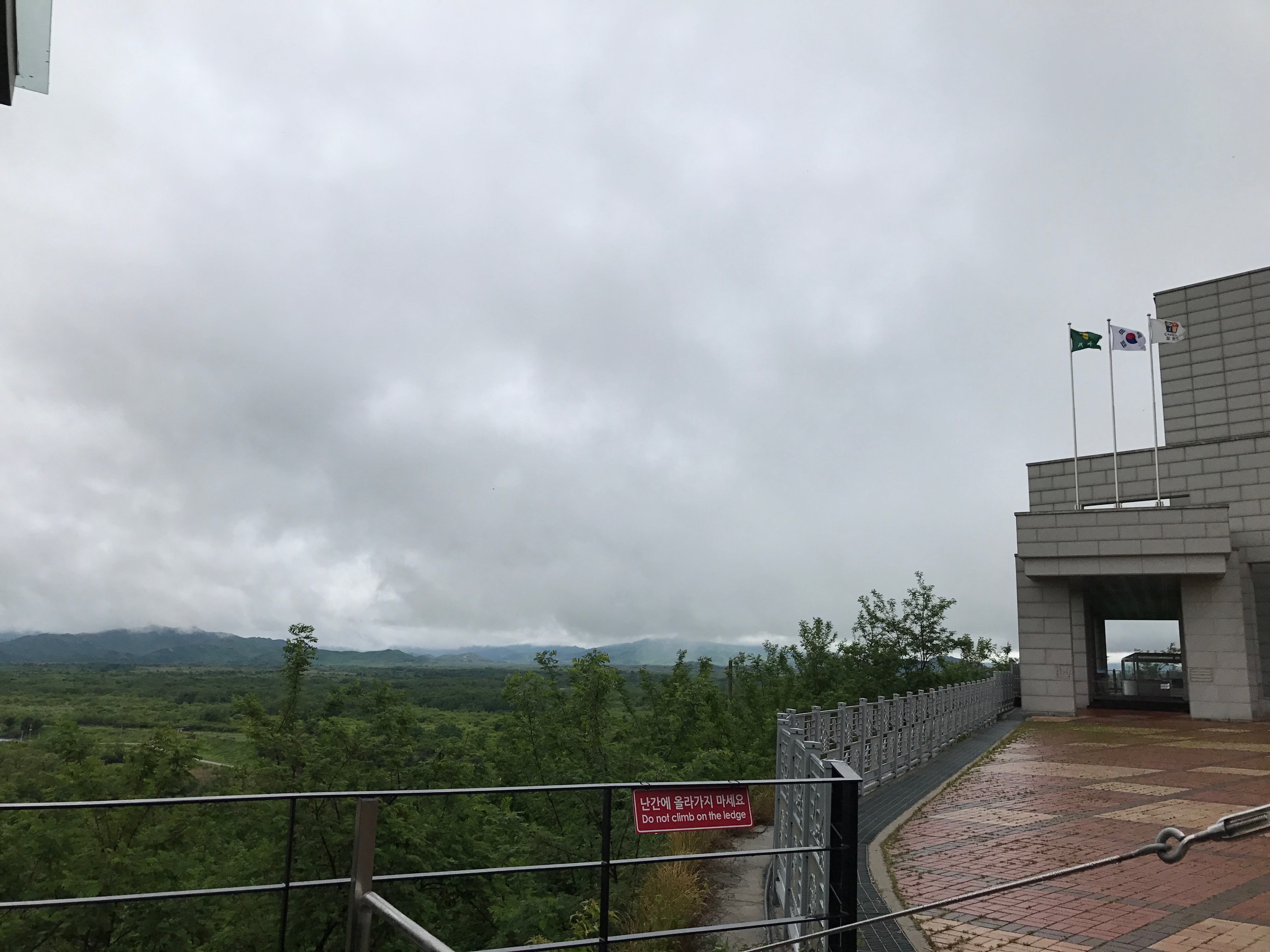 At a DMZ lookout post, we were greeted with North Korean propaganda over loudspeakers.  In the distance, where the hills begin, is North Norea.

As we reached a lookout point, North Korean propaganda began to play over a loudspeaker from their side.  Of course, we couldn’t understand it, but our guides told us that it was blaring anti-South Korea propaganda.  In the distance we could see North Korean outposts and fake villages set up to give the appearance of prosperity.  Even in the safety of South Korea, the experience is unnerving.

At the top of this outlook, with North Korean soldiers undoubtedly looking on, we prayed for their country.  We prayed for peace and unity and that the gospel would be able to spread there, despite a dictator who would have it crushed.  We prayed that God would change the hearts of the leaders in North Korea.

The next day we headed to the Korean War Museum and the Korean Missionary Memorial.  The Korean war museum was a powerful reminder of a war that is often forgotten.  The names of Tennessee lives lost etched into granite was a reminder of the great sacrifice our very own gave to the freedom of this country.  The Missionary Memorial is the final resting place of about 150 missionaries to Korea (including several from Tennessee — one from Maryville).  Each missionary played an important role in bringing the gospel to Korea.  Some owned hospitals, some were doctors and some interpreted the Bible. 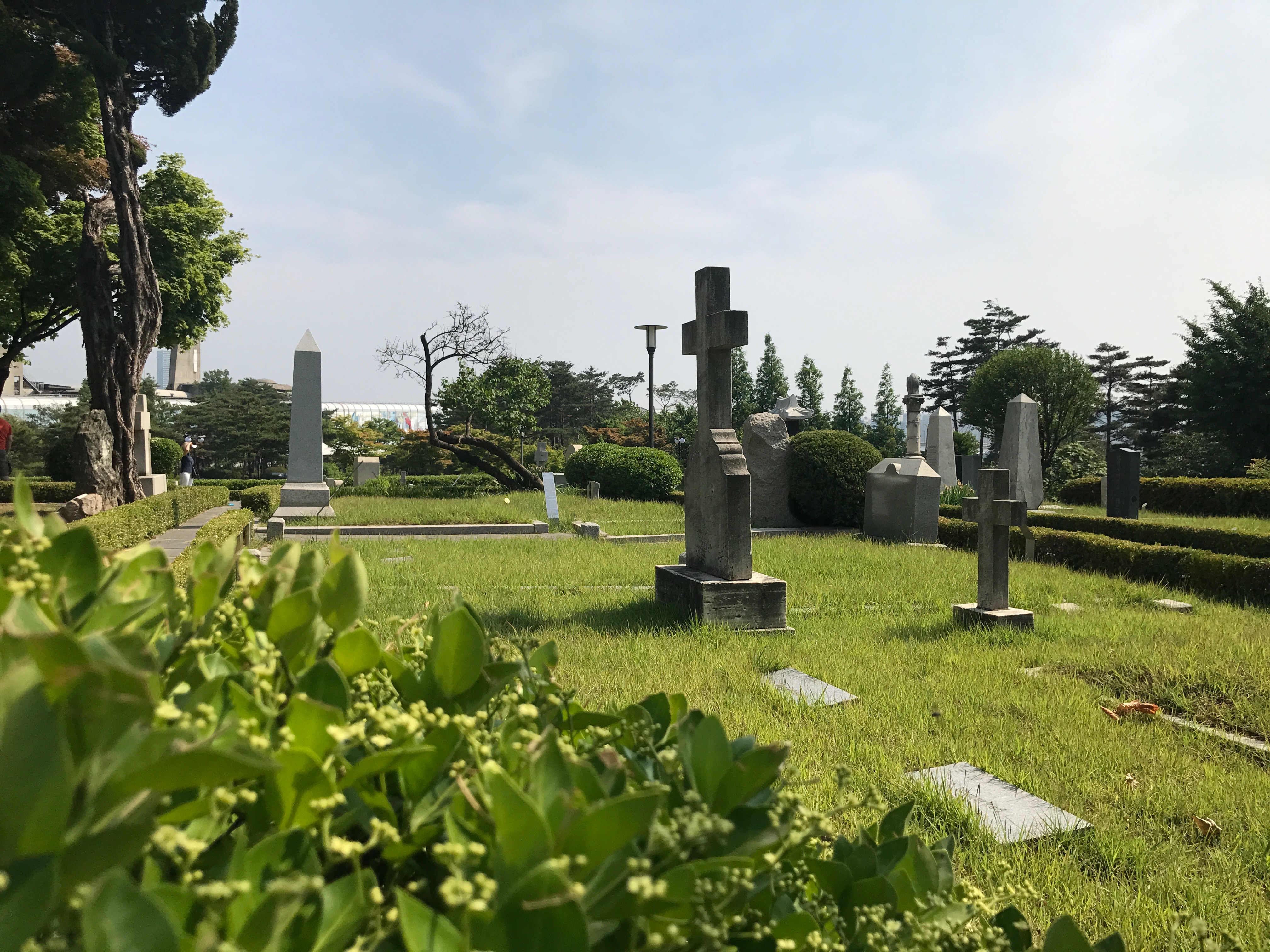 Graves in the South Korea Missionary Cemetary.  Missionaries from all over the world, including Tennessee, have been laid to rest here.

It was these missionaries and these soldiers that made our whole trip possible.  They were the reason we were standing there.  They brought hope, it different ways, to the Korean people.  Though the circumstances are now different, Sovereign Grace now helps carry the torch they lit, bringing hope through the gospel.

In South Korea it is common for churches to have red crosses on their buildings.  On the top of the DMZ, there’s such a church with such a cross.  It looks over the divide between the north and the south.  At night, the cross lights up.  I know the soldiers in the north can surely see it.  I hope that one day they see it for what it truly means.  Like the children from camp that sang “We are the sons of the living God…we will rejoice and be glad in Him,” I hope they know they are loved, forgiven and that even in North Korea — they are free.

Weekly Devotion: Jesus is My Friend